I have very exciting news! Starting this month, my Cooking with the Stars segment will become a permanent and monthly column on my blog! Once a month, as close to the beginning of the month as possible, I will be cooking, reviewing (using a brand new rating system!), and posting a recipe personally created or eaten by a classic film star. Most of the time I’ll post a star’s dish on the month of his or her birthday (because I just love birthdays), but I’ll throw in some holiday themes and curveballs too, like this month’s recipe: Boris Karloff’s Steak and Kidney Pie! Last year I couldn’t help but whip up some incredible Vincent Price delicacies for my Halloween party (this year is going to be Hitchcock themed with goodies galore!), so I thought that it’d be fun to continue the Halloween tradition by recreating a dish courtesy of my all-time favorite horror actor and one of my most surprising crushes, the one and only Boris Karloff!

Boris Karloff was born William Henry Pratt to parents Edward John Pratt, Jr. and Eliza Sarah Millard on November 23, 1887 in what is now London, England, though he personally claimed that he was born in the nearby borough of Dulwich. His mother’s maternal aunt was Anna Leonowens, whose life story was the inspiration for the renowned musical The King and I (1956). Pratt was the youngest of nine, and after the passing of his mother he was raised by his older siblings. He attended an array of upstanding grammar and private schools throughout his childhood before enrolling in King’s College London where he set his sights on a career with the British Government’s Consular Service. Life had other plans for young William, however, and he left the university without graduating before relocating to Canada. While there he became a drifter, working a variety of odd jobs including farm labor, and in his spare time he began appearing in theatrical performances in Canada, choosing Boris Karloff as his stage name.

Starting in 1911, Karloff spent years traveling Canada and the northern United States as part of a multitude of theatrical troupes, all while still performing manual labor in order to make ends meet. This physical strain, which included his charitable efforts as part of a cleanup crew following the aftermath of The Regina Cyclone in 1912, caused back pains that Karloff endured for the rest of his life and which prevented him from enlisting in World War I. Karloff’s first brush with Hollywood was earning $5 as an extra in a Frank Borzage picture at Universal (the title of which has since been forgotten) and he continued to appear in a few silent films such as The Hope Diamond Mystery (1920) and King of the Wild (1930), but even then Karloff still found himself digging ditches in order to support himself. Slowly but surely Boris Karloff received better roles in early talkies like Five Star Final (1931) and the original Scarface (1932), but it wasn’t until he was cast in his eighty-first feature film, Frankenstein (1931), that he finally received the acclaim and notoriety that has cemented him as a legend, if not the legend, of the horror genre. There’s so much more to tell about his incredible and accomplished fifty years in pictures, but you could say that the rest is history!

Below you’ll find Boris Karloff’s recipe for Steak and Kidney Pie! As per usual, this recipe is courtesy of the amazing Jenny of Silver Screen Suppers. I wish I knew what cookbook it came from! It sure looks nice, doesn’t it? Boris has all of the ingredients and instructions listed on the page, but I’ll also list everything, including what I specifically used: 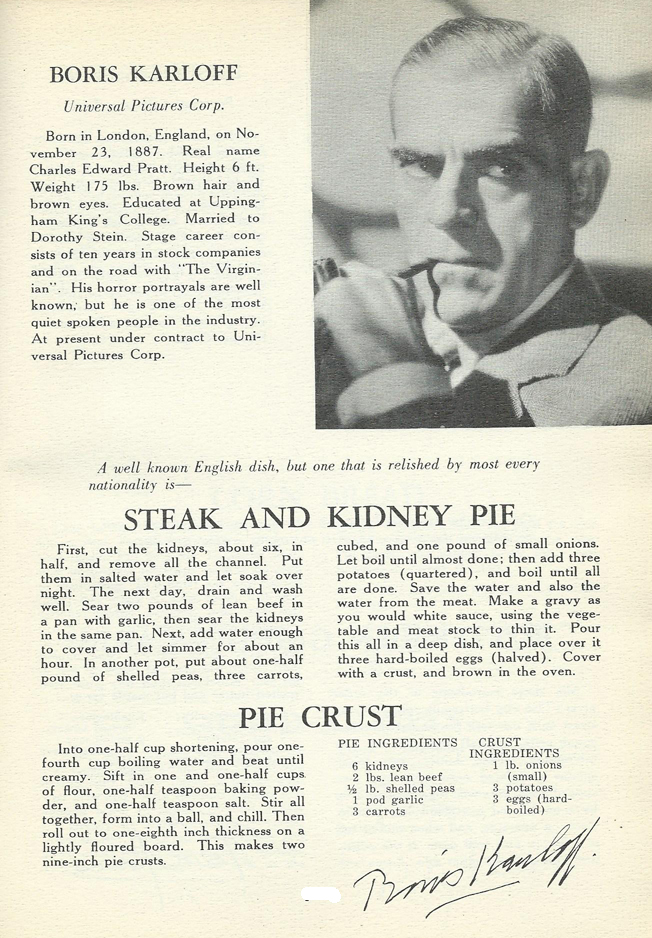 I tried to adjust and simplify here and there for my version. Here’s what I used, which made two pies:

My method was essentially the same as above. To save time, I used frozen, pre-cut carrots and peas and pre-made pie crusts and sheets, but the only thing that I did differently was that I added the vegetables and their liquid to the meat so I could free up the pot and make the gravy, draining the drippings from the meat and vegetable mixture all at once to thin it.

I will say firstly that these pies took a long time to make, I believe about four hours from beginning to end. A great deal of that time was spent attempting to butcher and prepare the kidneys. I consider myself an adventurous chef and eater, but as soon as I opened them up and smelled them, I knew that I was going to dislike them. They were awful to deal with, and removing the channel and dicing them was extremely cumbersome, probably the most trouble I’ve had with prepating any meat. I thought that the taste of the kidneys in the end result was pretty subpar too, but my boyfriend and roommate enjoyed both the kidneys themselves and the pie as a whole! Maybe it was because I was already traumatized with having to smell and handle them throughout the process, but eating them made me squeamish too. I made the recipe as true to Boris’ as I possibly could for my review, but if I ever made this again I would omit the kidneys completely and just include the steak, as blasphemous to the British as that is! I also couldn’t resist seasoning with at least some salt and pepper throughout the cooking process, but in the future I would include some thyme, rosemary, and other spices in the mixture to enhance the flavor of the meat and vegetables.

Overall, it was a pretty delicious and hearty meal with the exception of the kidneys. I wouldn’t recommend this for the faint of heart or unless you’re a big fan of Boris Karloff, steak and kidney pie, or both due to the time and effort needed to create this dish, but would I make it again? Absolutely! Would I change it quite a bit the second time around to suit my tastes? Definitely, but as far as meat pies go I think the basic structure of this is a winner! Now, to rate it according to my new ratings system, a simple one-to-five Vincents. I chose the iconic Vincent Price as my scale because as I’ve mentioned in a previous post, Vincent was without a doubt the finest and most accomplished chef in classic film (and it’s even more fitting now that it’s October!). So, without further ado, I give this first recipe of my new monthly column… three out of five Vincents!

I hope you enjoyed this review as much as I enjoyed writing it, and stay tuned for next month’s edition of Cooking with the Stars!