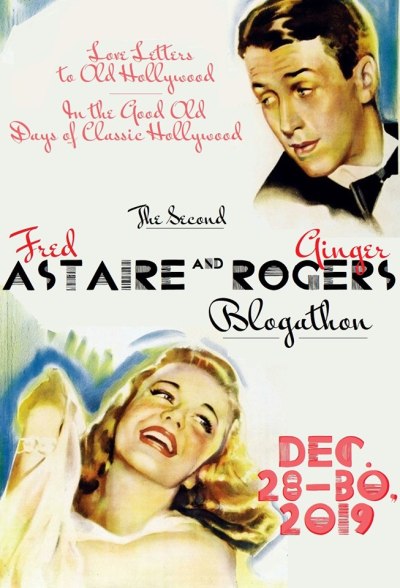 It’s almost 2020! Can you believe it? I feel so strange about the arrival of the new decade and I know I haven’t been writing much towards the end of this year, but one event beckoned me back to Musings of a Classic Film Addict: none other than the second-coming of The Fred Astaire and Ginger Rogers Blogathon, hosted as always by the lovely Crystal of In The Good Old Days Of Classic Hollywood and the incredible Michaela of Love Letters to Old Hollywood! You may or may not recall, but I had such a fun experience creating my personal ranking of all ten of Fred Astaire and Ginger Rogers’ films for the first occurrence of this blogathon. I still look back on the article as a reference when watching their pairings (and also for a good chuckle now and then!) so when I found out that the blogathon would be returning once again, I knew that I needed to sign up. Finding a subject to write about proved to be a bit more difficult, however, considering the fact that the blogathon is meant to honor both Astaire and Rogers, but I neatly covered all of their collaborations in one post last year. I knew that I had to pick only one half of this dynamic couple, and I ultimately went with Ginger for a few reasons. Not only do I adore her as a solo actress, I also recently purchased Having Wonderful Time (1938), a film of hers that I had never seen before, as part of the latest Warner Archive sale. I figured there would be no better way to salute Miss Rogers than by discovering something new and giving it my fresh take!

I initially bought Having Wonderful Time (1938) without reading much into it. All I knew about the film was that it was made in 1938, one of my favorite years in cinema, and that it starred Ginger opposite Douglas Fairbanks, Jr., who I’ve always admired and found to be one of the most underrated leading men in classic Hollywood. Those facts alone swayed me into buying the DVD, and it wasn’t until I began watching that I even learned the plot. The story revolves around Teddy Shaw (Ginger Rogers), a city gal who lives in a crowded and noisy apartment with her family in the Bronx. She commutes by subway to her dull job as a typist in New York City, and from the beginning it’s easy to see that she’s longing for a vacation where she can be surrounded by nature and fresh air. Luckily she soon gets her wish, kissing her family and her humdrum suitor Emil Beatty (Jack Carson) goodbye as she leaves for Camp Kare-Free, a summer camp for adults.

At first her shyness and hesitance to make friends with the boisterous campers makes Teddy’s experience less than ideal. Waiter and staffer at the camp Chick Kirkland (Douglas Fairbanks, Jr.) immediately sizes Teddy up, finding her attractive but stuck-up as he picks her up from the train station, but soon Teddy makes close friends with Fay (Peggy Conklin). Fay, who has already spent some time at the camp with her boyfriend Mac, reveals to Teddy that romance is the main goal of most of the campers, and she urges Teddy to join in on the fun. Teddy is less than interested in finding a man, however, and instead she makes friends with Henrietta (Eve Arden), Miriam (Lucille Ball), and Buzzy (Lee Bowman), Miriam’s beau who immediately drops her in favor of Teddy, whether his affections are returned or not.

During breakfast on Teddy’s second day at camp, we see Itchy (Red Skelton), the camp’s social director, as he impersonates some of the campers. This leads to an older camper making embarrassing and demeaning remarks about Chick, and when Chick retaliates, he’s nearly fired. Teddy, who witnessed the altercation, comes to Chick’s defense, an act which soon helps the two warm up to one another. At one of the camp’s dances, Chick refuses to dance with any of the female campers despite his obligation to do so as an employee, and when Teddy comes to the rescue once again by agreeing to dance with him, they begin to fall in love. We see a beautiful relationship blossom amongst the pine trees, but things quickly go south when they begin to discuss the subject of marriage.

It’s no secret that both Teddy and Chick want to get married, but while Teddy is ready to walk down the aisle, Chick is much more hesitant. He reveals that his job as a waiter at the camp is helping to pay for law school, and that it may be years before he has enough money to support the both of them. While he wants to wait until that happens before they wed, Chick implies that he doesn’t want to wait until they’re married to have sex with her. His suggestion infuriates Teddy, who decides to retaliate by making Chick believe that she’s spent the night with Buzzy, even though all they really did was play twelve straight games of backgammon. When the jealous Miriam discovers Teddy leaving Buzzy’s cabin the next morning, she threatens to ruin her reputation, and possibly Teddy’s chance at love along with it.

The film was based on a play of the same name written by Arthur Kober, which originally opened at the Lyceum Theater in New York City on February 20, 1937 and ran for 372 performances. Kober was signed on to write the screenplay for this film as well, but unfortunately the censors would not allow Kober to include the fact that all of the characters in the original story were Jewish. All of the characters were anglicized, and their Jewish last names along with some of the more humorous cultural wit from the original play were removed, which is a sad thing to realize considering how only a few years later, America would become involved in World War II and portray itself as a beacon of diversity. Having Wonderful Time (1938) resulted in a loss of $267,000, which equates to nearly $5 million today. To me, this movie has its pros and cons. Most of the reason why I wanted to see it was to see Ginger Rogers and Douglas Fairbanks Jr. sparkling in their prime, and to that end it didn’t disappoint at all. They make an adorable couple and I enjoyed every moment that they were onscreen.

My main gripe lies with how underutilized the supporting actors in this cast are, and I think that’s really what sinks this movie. I mean, come on, you have Lucille Ball, Eve Arden, Lee Bowman, Jack Carson, Ann Miller, and Red Skelton in his first ever picture, and none of them are given nearly enough to work with. Even Douglas Fairbanks, Jr. later wrote in his memoir, “…the big bosses at the studio were unable to appreciate Skelton’s broad, slapstick style and cut his part down to the barest minimum needed to hold the slender plot together.” I think that’s a crying shame, and I’m not even a Skelton fan! If I were making this movie, I would cut about half of these amazing stars out in favor of focusing on a few really magnificent performers, fully fleshing out dynamic characters for each. I think that’s what RKO should have done too, but for what it is, Having Wonderful Time (1938) is still worth seeing just to watch Rogers and Fairbanks onscreen at the same time as well as to get glimpses of some of the finest character actors in the business. I may not have been “having wonderful time” seeing this film, but it was pretty good and I’m bound to revisit it again soon!