It may be just before Christmas Eve as I write this post, but I could think of no one like the phenomenal Ava Gardner to ring in the holidays with, especially because today would have marked her 96th birthday! My thanks go to Maddy of Maddy Loves Her Classic Films who dreamed up the idea of honoring Ava on this joyous occasion. As soon as I came across the concept on my feed, I knew that I just had to participate. Over the last couple of years I’ve gone from nearly disliking Ava and only seeing one or two films of hers to becoming quite the fan and catching up with much of her filmography. It was because of this that I could have written about a number of topics. I could have chosen to review one of my favorite movies of hers like One Touch of Venus (1948), or catch a new-to-me picture like The Snows of Kilimanjaro (1952), but it dawned on me that this was the perfect opportunity for me to finally sit down and type out a post that I thought would never be written.

You see, in August of 2017, I flew up to Virginia with my boyfriend for the first time to meet some of his relatives, and while we had the time of our lives at the beach and in the cities there, a lot of the real fun was on our road trip back down to our home in Florida. I planned a handful of fun stops and activities for us to participate in, all of which I thoroughly enjoyed, but none of them made me nearly as excited as visiting the acclaimed Ava Gardner Museum, which was right on our way home in Smithfield, North Carolina. In the weeks leading up to the trip I engrossed myself in books and films starring Ava, and she nearly became an obsession of mine. I read her fantastic autobiography on the plane and watched some of her pictures like Whistle Stop (1946) and The Barefoot Contessa (1952), marveling at the brunette beauty. Finally we were on the road and the day finally came to visit the town that she was born in and see artifacts and treasures of the iconic actress in person. We drove up to the museum and the sight of the gorgeous marquee took my breath away. posters of her lined the sides of the building, and a lovely white emblem decorated the front door, . It was finally time to step inside.

We entered through the gift shop and were greeted by some charming Ava memorabilia as well as the sight of some of her film costumes in the distance, and we were greeted by one of the most charming Southern ladies I’d met on the trip. Her name was Sara, and she was happy to tell us a little bit about Ava’s history in the town as she led us to the screening room, a beautiful part of the museum adorned with art and vintage film posters featuring Ava. The room is used to show a brief documentary of the starlet to tourists, and while I was already aware of most of the information in the short as I’d just read Ava’s autobiography, I was still delighted by it and thrilled that so many of her friends and family were around to discuss her life.

As we exited the screening room we began our self-guided tour of the museum, beginning with an array of documents and information regarding her early life in Smithfield. I was stunned that the museum housed the Gardner family bible and her original high school diploma, for instance, and proud of how immaculately they were kept.

Next we caught sight of one of the real treasures of the museum, situated right in front as you walk in:

Next we saw a selection of writing both to and from Ava. Out of these, I was most blown away by a letter to Ava by her close friend and costar in Mogambo (1953), and one of my favorite actresses, Grace Kelly. It was surreal to see her handwriting with my own eyes, and it made me think of what a dream it would be to see some of her things in person as well.

Next we saw some memorabilia from one of Ava’s finest films, The Night of the Iguana (1964). Under glass was her personal copy of the script, along with a pistol with a fascinating backstory.

While filming The Night of the Iguana (1964), director John Huston knew that there would be offscreen drama with all of the big personalities of the cast on remote location in Mexico, so he gave each cast member a pistol with the names of their costars on the bullets. They pretended to shoot each other whenever they got into arguments, and all got along as a result. I had read this story before, and I was amazed to see Ava’s gun, complete with engraved bullets featuring the names of Richard Burton, John Huston, Deborah Kerr, and Sue Lyon.

The museum houses far more of Ava’s estate than what was displayed, but I was still catpivated by the selection highlighting Ava’s life and career.

One of the perks of the museum was a comfortable area off to the side with chairs and a television that played clips from Ava’s finest features on a loop. My boyfriend was tired from all of the driving that we had done, so he spent much of our time in the museum there, though he admitted to me afterwards that the clips had really caught his attention. He even spent some time on the drive home asking me which movies they were from and if we could watch them! I really commend the museum for finding another way to draw people into learning about Ava; while seeing her clothes and reading about her was more than enough for me, it’s wonderful that people retain information in different ways and that the museum accomodated that.

Another one of Ava’s costumes on display that took my breath away was none other than a safari jacket worn in Mogambo (1953). I may not be a fan of the movie, but I was still in awe.

And that wasn’t the only one of Ava’s many costumes in the museum that caught my attention. I was also so esctatic to see Ava’s red gown that she wore as she portrayed Julie Laverne in Show Boat (1951).

From there we entered the “library”, a room at the back of museum with tons of books. Some were written about Ava, some were personally owned by Ava, and some fell into both categories.

This room contained another television that played her television appearances, like her guest spot on one of my favorite game shows, What’s My Line? (1950-1975), on September 13th, 1953. The lower cabinet beneath the television contained Ava’s scripts from all of her movies! I could hardly believe that they weren’t on full display, but I was told that they were circulated out into the main room depending on which items they also had on display at any given time.

Also in the library were a few of Ava’s personal outfits, including one that she wore on a now-famous occasion, a publicity stunt in the 1950s during her travels to London in which she attempted to make a British guard smile! She felt ashamed of the incident for years afterward until the guard’s granddaughter approached her and told her that it was the proudest moment of his life, and that he told the story until he died.

These sorts of stories and items from classic film stars’ lives always fascinate me, and I was also glad to see next to this display a case of Ava’s personal makeup.

The next part of the museum contained trinkets from the latter part of Ava’s life. After her career in Hollywood ended she lived for decades in London, and some small furniture pieces and dishware from her London home were part of the museum’s collection. 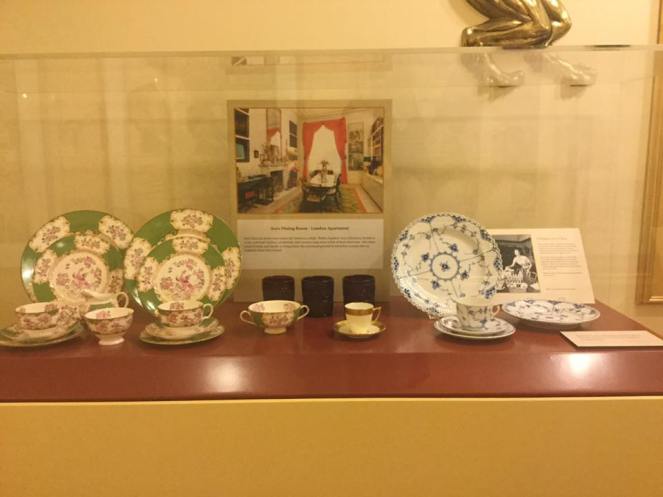 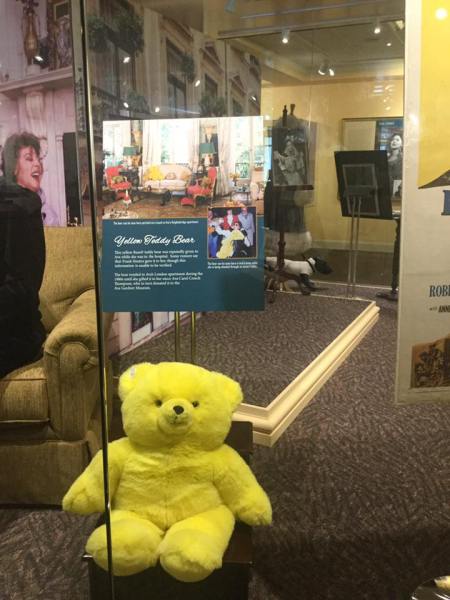 Some of the outfits that she wore in her later years were there as well, and along with these items was a large, bright yellow teddy bear thought to be given to her by ex-husband Frank Sinatra in the hopsital during her final days. I tend to believe this to be true because yellow was their color, and they considered each other to be the love of their lives.

Some of the other beautiful relics to Ava’s relationship with Frank Sinatra included a record player that belonged to the two of them with a copy of one of Frank’s songs that he wrote about her. 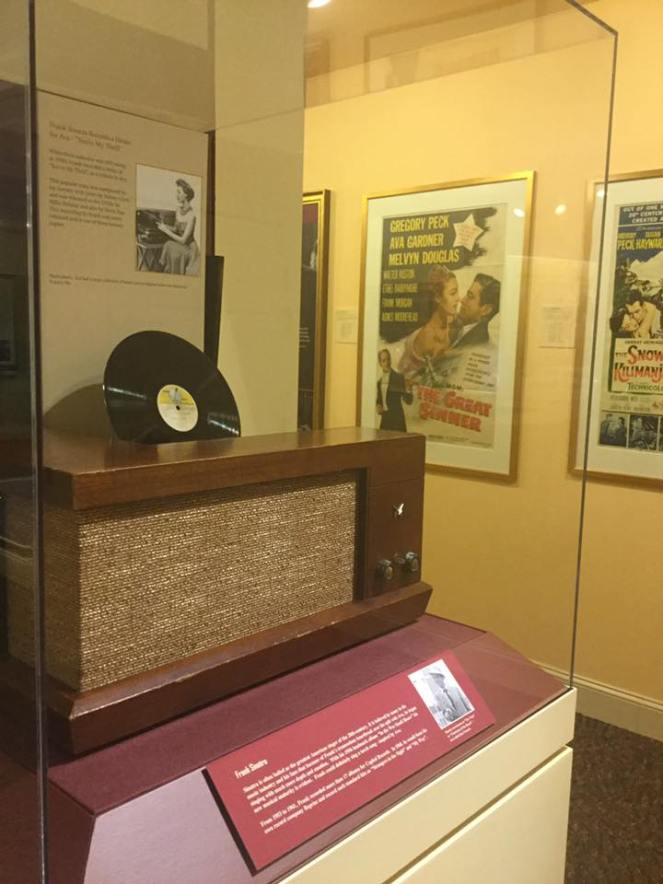 It was also fascinating to see a watch given to Frank by Ava that included an inscription on the back, “To Frank and desert nights, Ava”, which referenced their home in Palm Desert, California. This was especially interesting to me because I used to live there and heard quite a few tales about the notorious couple.

You’d better believe that I saved the best parts of the museum for last! The first of the two final displays contained a multitude of Ava’s jewelry and accessories. On top of being a classic film fanatic, I also can’t get enough of sparkling gems, so seeing the two combined in the museum was an awesome experience.

And as if that couldn’t be topped, the grand finale of The Ava Gardner Museum was their newest exhibit dedicated to her close friendship with Gregory Peck, who she starred with in three movies: The Great Sinner (1949), The Snows of Kilimanjaro (1952), and On the Beach (1959). He considered her among his favorite leading ladies, and even visited the museum in 2000, signing a few lobby cards from their films and discussing his time with her.

I couldn’t stop marveling at the black gown, revisiting it multiple times as I wandered through the museum, stopping to make sure I caught the perfect photograph. Once I did, our time at the museum was at an end. I bought some postcards, an Ava Gardner shirt which remains one of my favorites, and I also got some of the museum’s past calendars for free! Upon leaving, we knew that the trip wouldn’t be complete without paying our respects to Ava Gardner herself, who was buried less than a mile down the road at Sunset Memorial Park.

It was so moving to see her after spending so long admiring her life. She was truly a remarkable person who starred in remarkable pictures, and it warms my heart that The Ava Gardner Museum as well as her estate continue to work tirelessly to keep her memory and her posessions alive.

It’s worth mentioning that Ava herself attempted to visit the museum one evening late in her life along with her friends. When she tried to open the door, it was locked tight. One of her friends offered to find an employee to open it for her, but she replied, “I don’t need to see what’s in there. I’ve already lived it.”