Hey, fellow classic film fans! I’m back with my second installment of Cooking With the Stars, a series of posts in which I whip up and review a delicious recipe that was cooked or eaten by a classic film star. More often than not it will even be their own personal recipe! Most of the recipes that I’ll be posting in this series will be courtesy of one of my favorite bloggers, Jenny of Silver Screen Suppers. If you’ve ever wanted to try vintage cooking or the favorite foods of your favorite icons, her blog is the place to go! I’m fortunate enough to be one of the lucky test cooks for her upcoming Columbo Cookbook, a compilation of recipes that were either featured on the hit television show or cooked by one of its stars. Today I’ll be bringing you the second of three recipes that I plan to blog about for the book, Vera Miles’ Mexican Casserole, courtesy of the author of the upcoming book herself. Thank you so much once again, Jenny! 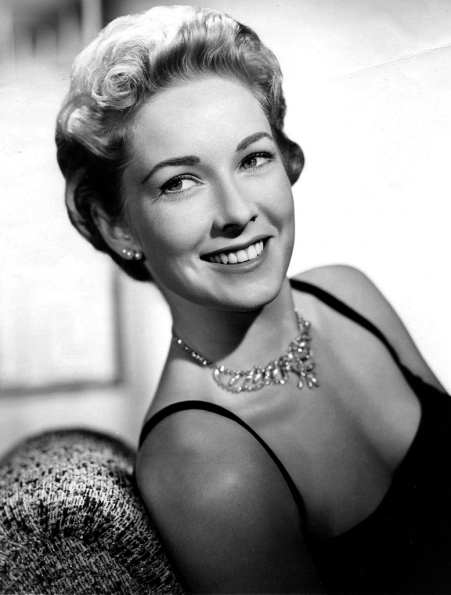 Vera Miles was born on August 23, 1929 in Boise City, Oklahoma, but soon after her birth her family relocated to Kansas, where she attended school in both Pratt and Wichita. After graduating from high school, Vera worked nights as a typist and operator for Western Union, but her first real taste of fame came in 1948 when she won the coveted title of Miss Wichita, and went on to win Miss Kansas and compete in the Miss America pageant. Vera excelled in the pageant circuit, snagging the titles of Miss Chamber of Commerce, Miss New Maid Margarine, and Miss Texas Grapefruit on top of that before 1951 came to an end. Her many titles as a beauty queen caught Hollywood’s eye, and Vera Miles moved to Los Angeles in 1950, landing bit parts in both film and television. It was the legendary director John Ford who gave Vera her first starring role in the classic western The Searchers (1956), opposite John Wayne. The very next year she began a five-year personal contract with another iconic filmmaker and the one with whom she’s most closely associated: none other than Alfred Hitchcock, who added Vera to the long list of delicate blondes who he hoped would serve as replacements for his muse, Grace Kelly, who had just retired from Hollywood in order to marry Prince Rainier of Monaco.

Her first job for Hitchcock came when she starred in the pilot episode of Hitchcock Presents (1955-1962), titled “Revenge”, in which she played the dramatic leading role of Elsa Spann, a woman assaulted by an unkown attacker. The master of suspense admired her performance so much that he instantly cast her in The Wrong Man (1957) with Henry Fonda, a film that proved to be yet another success in their partnership. Hitchcock put in motion a third thrilling production for his newest leading lady, but when Miles became pregnant with her third child, the director was forced to replace her with Kim Novak in what would eventually become one of his best known classics, Vertigo (1958). During and after her pregnancy Vera remained a constant in Hollywood, appearing in well-received films like The FBI Story (1959) with James Stewart and continuing to make numerous television appearances, which she would go on to do even after she stopped making films. Notwithstanding the gap between collaborations, Hitchcock was still determined to make Vera Miles his biggest star, and to do that he put her in her biggest role to date, that of Lila Crane in Psycho (1960). The film was a smash, yet Vera would only go on to appear in one more critically acclaimed film, The Man Who Shot Liberty Valance (1962). Despite her roles in so many iconic films and television shows (The Twilight Zone, The Man from U.N.C.L.E., Columbo, and The Outer Limits, to name a few), sadly Vera hasn’t received the fame and notoriety that she deserves. Though she retired from acting in 1995 and has declined public appearances and interviews, she is fortunately still with us at age 87 and still graciously responds to her fan mail.

I was warned that this dish is very cheesy, but decided to go ahead and give it a try anyway, and I’m glad that I did! Luckily I’ve been watching The Twilight Zone (1959-1964) in order and was able to watch her episode, “Mirror Image”, while I was cooking. It was incredibly well-acted, and the special effects and camera tricks were phenomenal! If you want a delicious and versatile meal to munch on while you watch this lovely Hitchcock blonde in action, here’s how you can make this recipe:

It’s that easy! This wasn’t the healthiest meal that I’ve ever made (all that cheese meant a lot of grease!), but it tasted great! The egg and tomato made this a recipe that could be a perfect addition to a breakfast, lunch, or dinner. The recipe is wonderful as it is, but I could see more of the chilis or some fresh green bell pepper, spinach, or mushrooms making this a healthier and more complex brunch staple. I would also recommend dividing this recipe up if you’re just cooking for yourself and don’t want leftovers for days and days (mine lasted three!). I hope that you all get to try this for yourselves! You could even write to Vera if you love it! Stay tuned until my next review, where I’ll be trying out a dish from another Pyscho (1960) star!

2 thoughts on “Cooking With the Stars — Vera Miles’ Mexican Casserole”